A Public Visitation was held Tuesday, October 27th from noon until 2:00 p.m. at Bethel Lutheran Church.

Marilyn was born to Wilgard and Alice (Madsen) Johnson on August 12, 1939 in Morris, Minnesota. She and her brother, Wilgard, grew up near Moose Island. Marilyn attended school in Herman and graduated from Herman High School in 1957.

Marilyn was baptized, confirmed, married and now laid to rest at Bethel Lutheran Church in Herman. During her confirmation years, she met Harry, who became the love of her life. Harry “Bud” and Marilyn were married on November 16, 1957. Together they raised four children: Jana (Brian) Neid of Sleepy Eye, MN; Jeffrey (Brenda) of Glenwood, MN; Douglas (Barbara) of Herman, MN; and DeeAnn (Mike) Larson of Eagan, MN. She was a very proud grandma to Hayley (Justin) Bruns, Parker Neid; Mikayla Olson; Joseph Polzin; and Hannah and Kendra Larson.

Marilyn and Bud spent their entire married life in Herman. She was first and foremost a farm wife, mother and grandmother. Her faith was very important to her, and she volunteered her time at church on the Funeral Committee, Altar Committee, Ruth Circle, in Choir and as a Sunday School Teacher. Marilyn’s caring attitude led her to be a CNA at the Barrett Care Center, where her compassion and grace made a difference every day to the residents and staff. Marilyn spent nine years working in the Studies and Stuff after-school program.

Marilyn was always busy. She and Bud milked cows for forty-seven years, she hauled thousands of lunches to the field during planting and harvest, planned numerous family reunions, and loved to socialize with the Weigh-In Group and Homemakers. Marilyn worked as an election judge and a blood drive volunteer. Her home was the lunch counter and base for fall deer hunting, which always led to a house full of family and friends. She had a passion for her flower beds and loved to play piano.

All of those things were important to her, but not nearly as important as her family. She looked forward to every Christmas, holiday, and weekend when her kids and grandkids could all come home. She loved to take care of everyone and lived a very full life.

In addition to her parents, Marilyn was preceded in death by her brother, Wilgard; in-laws Muriel and Lloyd Christopherson, Allen and Joyce Olson, Dennis Peterson, and Vernal Olson; nieces Corlys Christopherson and Carol Sylskar. 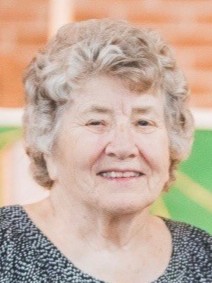