Funeral services for Doris Sperr of Herman, will be held Saturday, July 11, 2020 at the Herman Community Center in Herman, MN. Visitation will be held Friday, July 10, 2020 from 4:00 to 7:00 p.m. at the Pedersen Funeral Home in Morris, MN and for one hour prior to services at the community center on Saturday. Burial will be in Lakeside Cemetery in Herman.

Doris Jane Ogg was born to Ray and Noma (Rarer) Ogg in Gorton Twp. Grant County, MN on May 4, 1940. She was baptized and confirmed in the Lutheran faith and a member of Bethel Lutheran Church in Herman, MN. She attended the Norcross School through 6th grade. A school where her mother was also the Superintendent and a teacher. She then attended Junior and Senior High School at the Herman Community School. She was active in band, Theta Rho, and represented Herman in the 1957 Aquatennial Parade in Minneapolis.

Late in high school she met Irving Sperr. Irvy and Doris began dating and it was clear that they belonged together. Doris married Irving on June 14, 1958, two weeks after graduating from high school. When you know that you have found the “one”, then you want to be together as soon as possible.

Doris and Irvy moved to the farm where they spent their entire married life and dove into farming. They raised chickens, pigs, established a herd of dairy cows and raised crops.

Her life was centered on building her life with Irving and her children. She was an exceptional seamstress, learning her craft from her mother at a young age. She sewed her own wedding dress, sewed clothes for her family, and crafted quilts for her family. She was all business when it came to dealing with a sewing machine.

Her gifts in sewing paled in comparison to her culinary skills. Simple, hearty, delicious food was produced in abundance. If you happened to stop for coffee, most often you were treated to homemade bars, cake or doughnuts. If you were lucky enough to be fed a meal, you would most likely leave with the button on your jeans undone because you overdid. She baked and decorated cakes for all occasions. She canned like a maniac and her family had all their favorites, dill pickles, garden relish, pickled beets, green beans, canned beef or chicken. And her homemade bread…..well, her homemade bread… it was like a little bit of heaven came into your soul when you would eat one of her freshly baked buns with real butter.

When she wasn’t cooking or sewing, Doris enjoyed reading and catching up with friends and family over a cup of coffee.

Doris valued her extended family and kept up with her cousins and aunts and uncles. She hosted the Ogg Family Reunion more than once and attended the reunion as often as she and Irvy could when it was held in far flung places. She liked to travel and when the kids became old enough to manage the chores on their own, she and Irvy began taking driving trips together, venturing to Alaska and to the Florida Keys and lots of places in between. After Irving passed, she continued to make driving trips to visit relatives in Canada, Oregon, Idaho and Nebraska.

When the grandchildren began arriving, she found a new outlet for her affections and set about spoiling each of them. She loved them all dearly and was happiest when they were visiting her.

Doris made her journey to join Irvy early on Sunday morning, July 5th at the Fergus Falls hospital where she was recovering from knee replacement surgery having reached the age of 80 years. 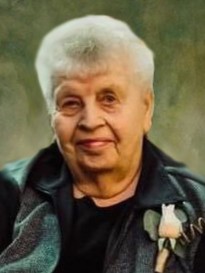